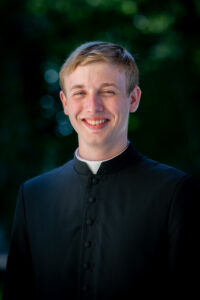 Throughout my life, I experienced passing thoughts where I wondered if I was being called to the priesthood. I largely ignored them when I was younger, but during my senior year of high school, they seemed to have all added up and I was aware that I couldn’t keep ignoring those little “calls”.  That year, the topic of priesthood seemed to come up unprompted on numerous occasions, while at the same time, I was becoming more aware and concerned for those who do not know Jesus Christ and His Church. A desire has been growing in me to respond to this dilemma and I realized that I was being called to unite those who are suffering to the peace of knowing God.

Before entering seminary, I attended Central Catholic High School in Bloomington, where I was involved in theater and music programs. In my free time, I worked a few, fun side jobs.

I found out that I metabolize anesthetics rapidly. In early 2021 I broke my wrist in a skiing accident and had surgery to repair the bones. The surgeon planned to use a nerve block on my arm, which is typical for that operation. However, when I was moved to the operating room, I could still feel everything, so they had to put me to sleep.