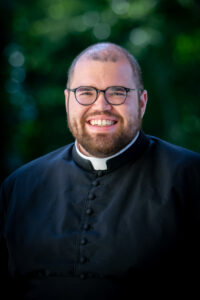 I first felt that I might be called to the priesthood during my freshman year of high school. I was opposed to the notion at first; however, through prayer, the witness of various priests that I have encountered, retreats such as Teens Encounter Christ and Emmaus Days, and a day working with the Little Sisters of the Poor, I became resolutely determined to discern my vocation and to follow God’s will for my life, whatever it may be. By the time my senior year arrived, one thing was clear: God was calling me to continue discerning my vocation as a seminarian.

I was a high school student at Marquette Academy in Ottawa.

I shot archery competitively for several years during elementary and high school. I won several state titles and competed at nationals twice.