Prayer is something that we often take for granted or misinterpret. Many think of prayer as saying “Hail Marys” or “Our Fathers,” but that’s not all there is to it. Those are prayers, but prayer itself is an act. It’s the act of deepening your relationship with God. When you pray, either by attending Mass, saying the Rosary, meditating on the Scriptures or just taking a moment to check in with God, you are building a relationship. And just like any relationship between two people, this relationship with God moves through several phases before it reaches its peak.

At first, prayer is about talking. Sharing your gratitude, love, concerns or even desires with the Lord. He loves you and is always willing to hear what you have to say, and prayer is the fastest, easiest way to talk to Him. But like any other conversation, prayer should be about more than talking. It should also be about listening.

When you talk to your friends, do you speak uninterrupted for the entirety of the conversation?  Part of the joy of conversation is hearing what other people have to say. This is no different with God, who is always trying to let you know His will. However, God is patient. He will only speak to you when you are done talking, and even then He may not choose to respond immediately.

For this reason, it is important to take your prayer life from speaking and listening to a point where you are regularly or even constantly thinking about God. Even when you aren’t in prayer, even when you’re nowhere near a church, you should be thinking about God. How would He want you to react to a situation? What would He say about whatever it is you’re thinking about? This doesn’t necessarily mean you should filter every action and decision through the Lord (He probably isn’t worried about what you’re having for lunch), but rather that you should be constantly aware of His presence and wishes, even when they aren’t part of the subject at hand.

The ultimate goal of your prayer life should go beyond just thinking about God. The ideal is a constant, unconscious relationship in which you share your life with God. He is everywhere at all times, but this can still be a difficult stage to reach. You must be aware that, even when you’re entirely alone, God is there. Maybe you’re just watching television or reading a book, but God is in the room with you. When you are comfortable in this relationship with God, you will have reached a point beyond talking, listening or even thinking where you and Him are simply sharing your life. Once you’ve reached this state, the Lord will reveal His wishes for you. 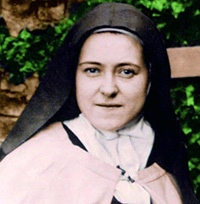 If you’re looking for a more directed way to help, you can pray the Novena to Saint Therese, Patroness of Vocations.