By doing all of those things, you’ll be on the right path to discerning your vocation. Unfortunately, doing God’s will is never as simple as filling out a checklist. There will be obstacles on your path, and if you aren’t careful they can stop you from fulfilling the Lord’s wishes. The most prevalent and obvious of these obstacles is sin.

Sin is more than just breaking arbitrary rules. Sin is willfully turning away from God and His desires, and must always be seen as such. Just like in any other friendship, by ignoring or spiting God you can damage or even destroy your relationship with Him. During the process of discernment, sin is like mud that covers our spiritual eyes and ears, preventing us from seeing or hearing the Lord.

The best way to deal with sin is frequent confession. Through this Sacrament, you receive God’s forgiveness for all the times you turned away from Him.  If sin is mud covering our eyes, absolution is cleansing water that clears our eyes and allows us to see Him once again.

However, simply being free of serious or mortal sin is not enough. We still have the never-ending task of dealing with our venial sins and the attachment we have to them. Even when you don’t actually follow through on an act of sin, the intention can still be there. You must rid yourself of those intentions. St. Francis de Sales once likened our attachments to sin to the Israelites who sometimes longed for the comforts they had as slaves when things got too hard in the desert. They yearned for the meat and fruit that they had, even though they lived in fear of the lash every day. Spiritually, these attachments to sin are like those Israelites’ attachment to food. It keeps you in your place of slavery, and you can never be totally free until you deal with it.

So if you prevent sin from metaphorically covering your ears, does that mean you’re ready to hear the Lord’s call? The answer is yes and no. You will hear the Lord’s voice, but it may not necessarily be the only thing you hear. 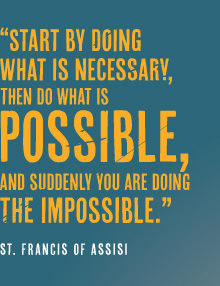