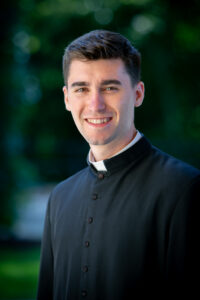 I became a seminarian because I believe God has called me to be His Priest and I trust in His call. When I was a junior in college, I began to ask God what he wanted for my life. The unexpected answer came while I was attending Mass. It was if a spark had ignited within my heart and deep down I knew that the Lord was pulling me towards the priesthood. When I felt this burning in my heart, I remembered the disciples on the road to Emmaus. “Were not our hearts burning within us while He spoke to us on the way?” Just as Simeon of Cyrene was picked out of the crowd to carry the cross of Christ, I too was picked and encountered the Son of God. I never imagined any of this. My life is forever changed and forever His.

I was studying architecture at the University of Illinois. I planned on using my skills to pursue a career as a Walt Disney Imagineer designing the theme parks.

I got to float in the Dead Sea and ride on a camel.