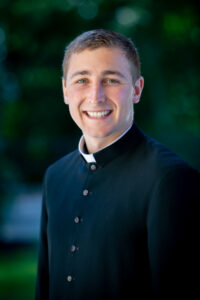 I believe that the Father not only has a plan set aside for each of our lives, but also that His plans are greater than anything we could do on our own. As I moved through the early years of my young adulthood from high school, to college, and preparing for further graduate studies, I always found myself ultimately unfulfilled in the plans I had put together for myself. Through prayer I realized that the moments where I did experience fulfillment with an inner sense of peace and joy were in participating in the sacraments and opportunities to share the faith with others. I’ve always been inspired by my namesake, St. John Paul II, who said lovingly, but with a definitive call to action, “Do not be afraid. Do not be satisfied with mediocrity. Put out into the deep and let down your nets for a catch.” I became a seminarian because I believe the Lord is asking me to surrender my plans and my life to Him in a more radical way so that He can do greater things than I ever imagined. Like Peter crossing the sea, I believe Christ is asking me to trust Him: to step out of the boat onto the water, to “Come” to Him, and to be not afraid of risking everything to follow His call (Mt. 14:29).

After graduating from Benedictine College with degrees in Biology and Philosophy, I planned to move to Kansas City to begin medical school and pursue my dream of becoming a physician to care for people who are physically suffering. I also planned to commission with the Navy to eventually become a physician in the US Armed Forces. Just before moving to Kansas, I heard the Divine Physician calling me to follow in His footsteps and to spend my life caring for those in an even greater type of agony: spiritual suffering. Now, I hope to one day join the ranks of Christ’s priests to serve on the spiritual battlefield for the salvation of souls.

I enjoy breaking away from the noisiness of the world into the silence of God’s creation whenever I get a chance. I especially enjoy multi-day backpacking trips with friends to share in the beauty and wonder of the outdoors while also participating in heated philosophical debates along the trail!