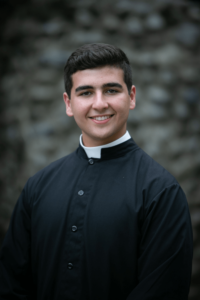 I started high school with many doubts about the Catholic faith. During my freshman year, I had an encounter with Jesus in the Eucharist where I believed that He was real – and truly present! That experience caused a conversion of heart and the question of God’s will for my life quickly arose. When I thought about the possibility of myself as a priest and bringing the Eucharist to the world, I felt my heart burning within me. This desire continued and was discerned throughout high school. By the time I was a senior, I was confident that seminary was the next step for me.

I am really close to my brothers, so I spent a lot of time with them as well as with friends, and even worked a little bit for a
landscaping company called Stojo, named after St. Joseph. I also attended Alleman High School, where I’m most proud to have started a group that would go to a daily mass and breakfast once a week before school on late start days.

An interesting fact about you:

My family is from Syria, so I was baptized and confirmed in the Maronite Rite, which is part of the Eastern branch of the Church and in full communion with the pope and Roman Catholics. I can also speak Arabic!

The Diocese of Peoria sponsors several seminarians, young men who have heard God’s call and answered.